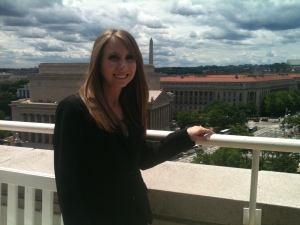 Lauren Sell, a recent graduate of Lubbock Christian University, already boasts an impressive resume. During the summer of 2012, Lauren was chosen to participate in LCU Washington, an internship program in Washington D.C. that partners with The Washington Center. Lauren was placed at TechAmerica, an advocacy organization that promotes the interests of the technology industry. Through her internship, Lauren was able to attend interviews that were conducted at The Navy Yard, The Department of Energy, and NASA Headquarters. Upon her return to Texas, Lauren answered a few questions about her incredible experience in Washington and how her recent opportunities in our Nation’s Capitol have influenced her future plans.

What aspect of your job did you enjoy most?
I also really enjoyed the office atmosphere at the company. Everyone was really friendly and helpful. They were very appreciative of their interns. They fed us multiple times and were always giving up helpful tips about how to secure a job in the area.

What’s one of your favorite memories?
New York, New York is only four hours away from DC and I was determined to go there before I left. Surprisingly, we were able to take in many of the main attractions in a short amount of time. We started off by riding the Staten Island Ferry past the Statue of Liberty. We walked through Central Park, then walked past the shops on Fifth Avenue. We stopped to eat dinner at Times Square, and the last stop of the night was The Empire State Building. The view from the observation deck was beautiful!

What surprised you about Washington as a city and as a location for an internship?
I was very surprised about how close everything was. I started out taking the metro everywhere, but after a while I realized it was cheaper and faster to walk. I was also surprised with how diverse the population was. Even within my office, there were interns and employees from various states and countries.

What became your favorite place in the city?
My favorite place to visit was The Capitol Building. Each time I toured, I saw something new. The architecture was just so unique and stunning. On one trip, I was able to secure tickets to view The House Gallery. I could just picture myself down there voting on various bills. One evening, I decided to go on a run to The Capitol Building. A military choir and band was playing patriotic music behind the building. I stopped to listen as the sun set in the background.

What faculty members were particularly useful here at LCU?
Dr. Patty was very helpful throughout the entire process. When I first became interested in the program, he gave me all the information I needed to get started. He even came to DC towards the end of our internships to check up on us and to see where we were living and working. He took us out to dinner and asked us specific questions about our trip. He was there for us anytime we had a question or concern.

Who impressed or inspired you the most while in Washington?
My supervisor, Joan Piccariello. She was already in the office when I arrived at work and was still there when I left. Joan had a ton of information to sort through, but she never seemed to forget anything. While excelling in her profession, Joan always made time for her family. She would always tell me about their weekend getaways and the adventures they would have. About halfway into my internship, Joan had a bad fall and had to have surgery. She still was trying to work from home. She was that dedicated. Joan proved to me that it is possible to have a good career and a good relationship with your family. 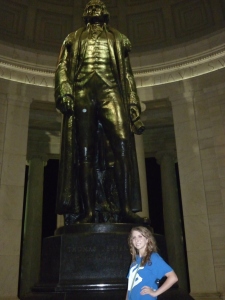 Did you take a class?  What was it like?
The name of my class was “From Ideas to Action: The Anatomy of Entrepreneurship.” We had three speakers come in periodically throughout the ten weeks to talk to us about the realities of opening a business. The class was responsible for building a student entrepreneurial website for The Washington Center. I found the class very helpful and received some great pointers to think about before opening a restaurant.

How did you take advantage of the networking possibilities?
I mainly took advantage of the networking possibilities within my office. Everyone at the office was very friendly and told me that if I was interested in finding a job in that area that I should let them know. I also volunteered at a cooking school called CulinAerie. At this location, I was able to talk to people who have worked various positions in the restaurant industry. Their advice was very helpful.

What new skills did your internship teach you, or what abilities did it help you hone?
It really helped me with my people skills. I am used to conversing with people around my same age, but in this position I had to talk to many older professionals. I had to hold myself in a way that seemed as if I deserved to be there too. I think it prepared me for how it is going to be as I enter into the work force. I also learned quite a bit about Microsoft Office. I had never really been great in Excel, but now I’m a pro.

Did LCU Washington alter your future plans or keep you steered in the same direction?
I could not figure out what to do when I got home. My dream is to open a restaurant, but I couldn’t decide what would be the best path to take me there. After consulting a few people in the restaurant industry, I decided that I really wanted to try and work a little more in various restaurants before I open my own. I fell in love with city life and therefore am currently searching for a job in Dallas, TX. I was previously planning on staying in Lubbock for a while.
Currently Lauren lives in Lubbock, Tx , with plans to move to the Dallas/Fort Worth area. We wish Lauren the best of luck in her future endeavors.